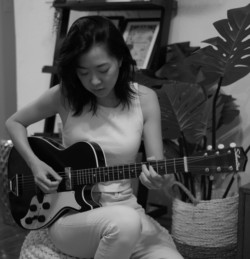 Shao Jean is a Singaporean composer and producer. Her musical roots began with the classical piano at age four and were shaped under studies with acclaimed pianist Ong Lip Tat. Since branching into composition, she loves writing thoughtful music, and crafting vibe-y and imaginative soundscapes.

She has worn different hats in the Film & TV industry in Los Angeles working as orchestrator, composer, score mixer and more. Her credits include Fox Searchlight’s Wendy (lead orchestrator & conductor), Ted Lasso on Apple TV+ (score tech engineer), and Discovery’s Bering Sea Gold (score mixer). She has also written music heard on networks such as MTV, SKY, Discovery Channel, and more. As a sound engineer, she has honed her craft at the world-renowned Village Studios, where she worked on records of Stevie Nicks, Elvis Presley, Weird Al Yankovic, among others.

Additionally, Shao Jean also writes songs and produces with artists. Her personal EP, a collaboration with Leyeux, has been featured on popular music/culture websites Indieshuffle and Stereofox and described as ‘clean and simple happiness’. The Straits Times awarded the EP ‘Album of the Week’.

She graduated from Berklee College of Music, majoring in Contemporary Music & Production, and Professional Music where she received the Jon Aldrich Award from the Songwriting department.

Aside from music, Shao Jean loves discovering hole-in-the-wall food and coffee places, getting lost hiking in the woods, and throwing fists at punching bags.

She looks forward to crafting a distinct boutique score for your project.