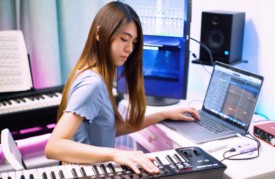 No Time to Die - Orchestral Arrangement

"Film music conveys the deeper feeling that cannot be spoken."

Born in a little town-Macau, I finished my bachelor studies in Shanghai Conservatory of Music. There, I study a lot about orchestral and Chinese music. My style of work is diverse, varied from Orchestral, Eastern, Romantic, Electronic, Horror, Ancientry Music etc. At the age of 5, I started learning the piano and obtained the Licentiate of the Royal School of Music with Distinction. I was also active in the past Macau Youth Music Competitions, including the first place of various advanced categories. I graduated from Sacred Heart Canossian College (English Section), was active in various music activities both in and outside campus, such as performing with the Macao Youth Symphony Orchestra and the SHCCES School Orchestra as a soloist.
During my junior school years, I have already shown her interest in composing. After graduation, she devotes herself to composing and participated in the Melco Crown Entertainment Macau Youth Original Music Competition in 2018 as one of the ten finalists. Afterwards, she was admitted to the Shanghai Conservatory of Music and studied composition under famous Chinese composers such as Li Lei, Shen Ye, Ji Dongyong and Qin Yi. She also studies film music theory under Chen Gong which has inspired her to compose for film.

Wing Music - Composer · By the Sea
© 2018 University of Southern California.