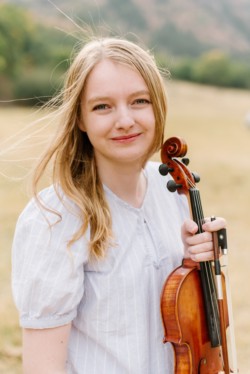 Hello! My name is Collette, and I’m a composer in USC’s Screen Scoring class of 2023. Originally from Tooele, Utah, I spent my early years practicing the violin from the age of four and making up songs on the piano with two fingers. Since then, I’ve discovered a love for stories of all kinds and compose music to bring them to life. I graduated with my bachelor’s degree in Commercial Music from Brigham Young University, where I was able to write scores for many student films, one of which won a student emmy award. I’ve also composed for music libraries, podcasts, and written demos for sample libraries. Having been classically trained, my musical strength is in orchestral music, but I love to branch out and experiment with all kinds of music.

As I compose, my goal is to enhance the story that is being told by bridging the gap between the screen and those watching. Whether it’s laughing and dancing with a silly pirate theme, sitting on the edge of your seat, or getting a little teary-eyed, I know film music has a powerful ability to impact viewers in an emotional way. Some of my most fulfilling experiences as a composer have been through collaborations on films, and I’ve enjoyed learning from filmmakers and musicians alike as we put our heads together and made music better than just any one person could.

Aside from constantly listening to film scores, I like to find a good book or tv series to enjoy, go on nature walks, or concoct elaborate treasure hunts. I’d love to collaborate with you, and you can reach me through my email jonescol@usc.edu.