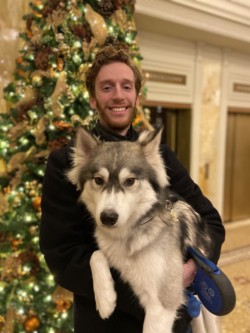 Indie Film - Emotional - All American. Video included at the end of my bio.

Hi, my name is Tristan and welcome to my page! If you'd like to see some of my work put to picture, you can check it out at the bottom of the page!

I'm from Alexandria, Virginia and I've spent most of my "adult" life performing music in an orchestral setting. In addition to my scoring work, I have been playing trumpet professionally for over 10 years. I studied trumpet at The Juilliard School for my undergraduate and while still in school I won an audition to play in a full-time orchestra. I was recently principal trumpet of the Jacksonville Symphony for 5 great years although I chose to leave the position in order to pursue my lifelong goal of being a composer for film. In addition to playing trumpet with some of the best orchestras in the country (Boston Symphony, San Francisco Symphony, Atlanta Symphony) I am also a member of the viral internet duo the Melodica Men.

The Melodica Men is a group that a close friend and I founded where we play covers(so to speak) of hugely popular movie, video game, and orchestral music. We have accrued over 1.5 million followers and our videos have been seen more than 200 million times on all social media! With Melodica Men I have been given the opportunity to travel all around the world playing shows and we've even been scheduled to headline a concert with the BBC Symphony in London in upcoming seasons. If you are interested in taking a DEEP dive into the obscure and entertaining world of melodica, check out the Melodica Men on Facebook or Youtube.

I have written a wide variety of music, some of which is included on this page, so rather than typing words to try and tell you what my music sounds like...go ahead and have a listen if you're interested. I've had tons of experience writing for short films and I have also written tracks for Hans Zimmer's Bleeding Fingers Music and Extreme Music in Santa Monica.

When I'm not sitting in front of my computer for hours working on music...my favorite things are: spending time talking with interesting people and friends, watching movies (of course...), playing video games (can't go wrong with this), AND last but not least, spending time hugging my son Chandler (he's a dog...) who I worship above all else.

Feel free to reach out to me at tristan.lane.clarke@gmail.com or tlclarke@usc.edu. Thanks for reading and I look forward to meeting you!

Here are some examples of my scoring to picture:

An emotional scene which uses lots of underscore and subtle music under dialogue much like you'd find in an indie film.

An uplifting and nostalgic scene where Stephen Hawking reflects on his life.

A Tragic scene from the Zookeeper's Wife showing the burning of a Jewish Ghetto in Poland.