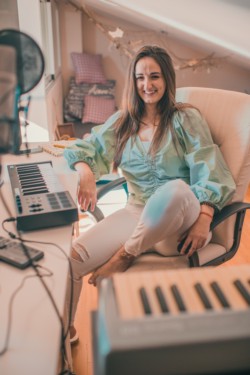 I was born in Alicante, Spain, where I studied piano and singing before moving to Barcelona. There I obtained my BFA in Music Composition at the Escola Superior de Música de Catalunya (ESMUC) and was awarded the 2020 Fulbright scholarship.

I recently finished my first feature film and I am currently working on three commissions for the film library of Catalonia, the 20th anniversary of the Esmuc, and the Palau de la Música of Barcelona for the new project Barcelona Sound Creation.

During my studies, contemporary composer Christophe Havel led me into the world of electroacoustic music and music production. The third year of my bachelors was completed at the Sibelius Academy, Finland, where I participated in the “Keys to Cancer” project for Roche Foundation Medicine. The project culminated in the creation of the first musical works from genetic data related to cancer as well as the release of a documentary film that covered the creation process. I finished my time at Esmuc as a student of the film music composer Arnau Bataller.

My final thesis consisted of the creation and analysis of a genetic algorithm for harmonic and melodic development. This awakened my interest in searching for new ways to implement algorithmic composition in film scoring.

I am in love with world music and like to be involved in projects of different nature. This leads me to constant research and fusion of compositional processes, often drawing inspiration from textures and sounds from different genres.

Below you can also find the documentary film of the "Keys to Cancer" project covering the process of creating the pieces.