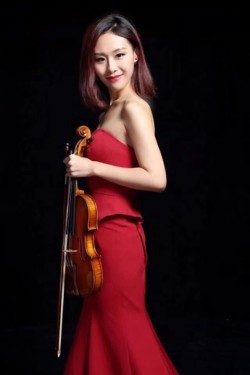 Into The Sunset( full orchestral, animation)

Hanxiu Zhang is a film composer, orchestrator, violinist as well as an expert in Erhu (Chinese 2-string bowed instrument) currently based in Los Angeles. Her work has appeared in film, television, documentary, animation, commercial, classical music, pop music, musical. Her classical training began at age of 4, culminating in being principle violin for one of the main orchestras in China--Jiangsu symphony orchestra.

She was admitted to the affiliated high school of Nanjing University Of The Art where she started to be trained as a professional musician. She also got her first Master's degree in Nanjing University Of The Art and successfully held a solo violin concert in 2017. Untimately, her love of cinematic storytelling and collaboration led her to a career in film scoring, which she sees as an excited opportunity to continue her musical explorations.

As a composer of screen and technology music, she wrote music for drama, animation, adventure, action, documentry, game. Hanxiu's distinctive musical signature is characterized by emotional resonance, color of orchestration, beautiful melody, complex chord progression. As a violinist, she has played at Lincolin Center in New York and Elbphilharmonic Hall in Hamburg and has enjoyed performing with Langlang, Sarah Brightman, Jianwang. Playing various kinds of different symphonies and communicating with premier composers in the world inspired her to think more about composition. Her music was performed by Jiangsu symphony orchestra in 2019.

She is willing to hear about what you're creating and she's passionate about collaborating with composers, directors. Please don't hesitate to ask her any questions. She will get in touch as soon as possible.