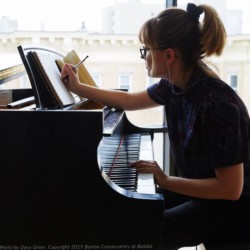 Christa Duggan is a composer based in Los Angeles, CA, originally from Fort Lauderdale, FL. In May 2022, Christa graduated from USC Thornton’s Screen Scoring Masters program with a Masters of Music in Screen Scoring. During her time at USC, she was selected to participate in USC Thornton’s Mentorship program for the 2021-2022 term and was privately mentored by Randy Newman.

Her musical background includes classical training and private instruction in composition, percussion, and piano. Christa received her Bachelor’s degree in Composition from the Boston Conservatory at Berklee and was one of the first students to graduate with Berklee College of Music’s newly-launched screen scoring minor.

As a concert composer, Christa has composed for a variety of instruments and ensembles as well as different art forms, including visual-media and dance, with each piece exploring genre-pushing soundscapes. Her works have been performed by the Florida Youth Orchestra, The FYO Percussion Ensemble, Transient Canvas, Sentient Robots, Worcester Chamber Music Society, Music for Salem Summer Festival, Arx Duo, The Boston Conservatory's Choir, and by members of The Boston Conservatory's Classical Contemporary Program.

As a film composer, she has composed for a variety of short films and is passionate about the collaborative process rooted in film scoring. For the Summer of 2020, Christa was awarded a scholarship to participate in the NYU/ASCAP Film Scoring Workshop, NYU/BMI TV Scoring Workshop, and NYU/BMI Advertising Workshop, which further ignited her passion to compose for film, tv and video games. Christa has also served as the Vice President of Operations for the woman-owned production music library, Mpath LLC, where she is also a featured composer and is a member of the Alliance for Women Film Composers.