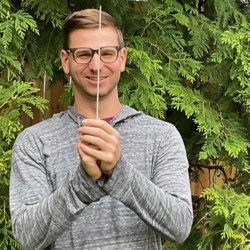 You Knew Before I Did (Romance)

Alex Meade is a composer for film, television, and games from Birmingham, Michigan currently living in Los Angeles. He has composed for many games and films including award winning short films (Chasing Light, Pumpkin Pal), and additional music for the highly anticipated sci-fi simulation game One Lonely Outpost. He has interned for Michael Levine, and assisted David Bateman writing additional music for a handful of slasher films on Lifetime.

Alex attended the Interlochen Arts Academy studying trumpet and conducting. From there he went on to study music at the University of Wisconsin - Madison where he began his studies in composition and orchestration. While at UW, he played in an eclectic array of groups including jazz band, orchestra, brass quintet, and an electro-acoustic ensemble. After graduating he was selected alongside seven other composers and songwriters for the Society of Composers and Lyricists mentor program in LA. His biggest musical influences are Dan Romer, Gareth Coker, Alexandre Desplat, and the Canadian pop duo Neon Dreams.

Alex particularly enjoys the collaborative aspect of composing for films and games and tirelessly works to reach the emotional core of every project.

Favorite Games: Ori and the Will of the Wisps, Jedi: Fallen Order, Legends of Runeterra, Bioshock