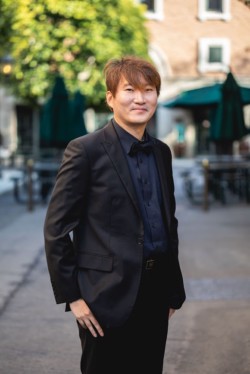 One Last Chance of My Life (Adventure, Dramatic)

Surin Song is a professional, classically-trained score composer, audio engineer and orchestrator based in Los Angeles. He was also an in-house staff composer and audio engineer for 3 years in the top-notch art institute before. He has not only done a lot of noticeable collaborating works with new media artists from all over the world in a wide range of concert halls but recorded and mixed a lot of complicated instrumental tracks with a variety of independent film directors, producers and musicians in a large recording studio.

As a composer, Surin has ever composed for over 20 independent movies, animated films, documentaries, video game trailers with his versatile vocabulary in music for years. He has officially won a silver medal award in Global Music Award 2018 in United States with his full-length studio album production in both composition and sound engineering. He has scored some films such as ‘Noboru’, ‘Daffodil’, ‘Second Star to the Right’ credited in HBO and IMDB, and for about 1 year, as an assistant composer he has not only worked with a nationally known composer Mark Watters, who is a six-time Emmy Award winning composer and the music director of Atlanta / Salt Lake City Olympic games, but also worked with William V. Malpede, who is also a great Hollywood composer for Disney Junior channel and his mentor.

In his experience, he has achieved much successful overseas work experience contributing to art business of his workplaces. He participated as a world music composer and an audio engineer in Batik International Exhibition with a performance called “Accumulation of Time” held in the Art & Technology Center in June 2016. Batik patterns represent the essence of Indonesian traditional art, and Surin composed as well as engineered the musical theme for the exhibition to be performed with Indonesian batik artists.

In January 2017, Surin began working music with Italian performing arts director Andrea Paciotto, VR (virtual reality) programmer Paul Harden and Dutch interactive programmer Jan Klug as a 3D sound technician on the performance VR Tempest, a recent media art performance combining VR and performance art. The binaural sounds in a stereo were created on-site through a dummy head microphone and a binaural ambience recorder, giving the impression of VR to the human ear. This made it possible for the audience to experience the sounds of the scene and the auditory sense of music.

Moreover, in collaboration with a famous video artist Jason Trucco, who pioneered the field of new form art through a combination of American performance arts and new media in exhibitions like “Hi-Fi, Wi-Fi and Sci-Fi”, Surin greatly worked as the main music & sound director who oversaw audiovisual sound design and audio technology as well as underscores in all areas. Based on his remarkable work experience, now he continues his music career in Los Angeles in the most competitive film scoring field, and his unrivaled enthusiasm for composition will serve as a crucial, healthy contribution to your film projects.

In addition to composing, orchestrating and notating, Surin is also an officially certified versatile audio engineer who has a lot of recording, live audio engineering, mixing and even mastering experience with a variety of peer film directors, producers and musicians in a large recording studio and a wide range of concert halls during his work years. He is very tech-savvy in terms of managing both analog gear and software, and he loves to add analog flavors in all of his sound engineering works with his hardware equipment in his own studio. In this respect, he will deliver you his spectacular music making your film so much come alive with the top organic audio quality.