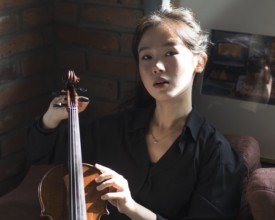 03 Meeting Grim Reapers (Along with The Gods, 2017) / Fantasy, Storytelling

Hi, I'm Seowon. Thanks for stopping by my page! I have been working as an assistant film composer in South Korea and here are some scores I have made. Check below if you need some serious version of my Bio.

Seowon Hyun is a composer for film, TV and visual media from South Korea who believes in the power of film music that can speak right to one’s deepest heart. She has composed over 100 scores for feature films and TV dramas, including films from South Korea and China. Recently, her film 'Child (2021)' was successfully released in South Korea. Working as a music director’s assistant composer, films including her scores were also released in United States and in many Asia countries, such as ‘Along with The Gods: The Two Worlds’(2017) , ‘Along with The Gods: The Last 49 days’(2018), and ‘Ashfall’(2019).

Seowon has a lifelong passion for an orchestral sound. In 2019, she had the honor to be selected as a co-composer by the Korean government to write a symphony celebrating The Korean Centennial Anniversary. Her piece, 'The Origin' was premiered by ‘Seoul Philharmonic Orchestra’.(2019) She has also recorded her scores with ‘The City of Prague Philharmonic Orchestra’(2017)

Seowon studied History in Yonsei University. She is now facing her new chapter entering the renowned Screen Scoring Master Program at the University of Southern California, where she was awarded The Sandra and Alan Silvestri Scholarship. She is thrilled to expand her career and her musical world in LA.