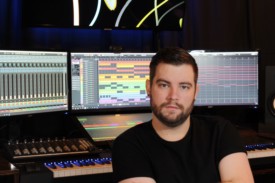 Hello! I am Samuel Mohart, a Film, Game, and TV Composer and Vocalist from Kansas City, Missouri. I got my bachelors degree at the University of Missouri-Kansas City studying Vocal Performance in Opera, and also studied Film Scoring privately with composer/professor Paul Rudy. I grew up singing and studying piano but always had an affinity for music in films and games. My early musical achievements are mostly in Musical Theater, Opera, and a high school garage band project ‘Civil Symphony’. Although my musical career has mostly been focused around being a vocalist, my true passion lies with creating, and storytelling. In my studies during my bachelors degree, I finally got the opportunity to give the job of scoring for picture a go. I enrolled in a Film Scoring course, and though I was the only non-composer major in the class, I excelled and felt like I could actually pursue my dream job. After completing my studies at UMKC, I enrolled at USC and got accepted to the best Screen Scoring program in the USA. In the past few years, I have composed personal student projects for Film, Video Games, and also commercial contracted work with the University of Missouri Saint Louis.
I look forward to working with filmmakers, video game creators, and other musicians and composers! I have a huge passion for film and games and would love to work with creative people on their projects. Please reach out to me by email if you are interested in working with me on your project. Thanks, and I’m so excited for this upcoming journey.
mohart@usc.edu
www.samuelmohart.com
PORTFOLIO