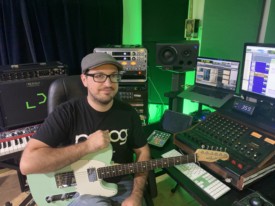 "Under The Stairs" (Spooky/ Orchestral)

Mario Verlangieri is a composer, multi-instrumentalist, and sound engineer based in Los Angeles, California. His passion for musical storytelling started at a young age - he was exposed early on to John Williams, James Horner, Bach, and The Beatles and would often be caught humming soundtracks while acting out favorite movie scenes with his Legos. But it wasn’t until he picked up the guitar as a teenager that he discovered music as a medium to express emotion. He played in local bands throughout high school, and decided to pursue a formal music education in college. Mario studied classical guitar under Stuart Green and Music Technology under Scott Vance, completing degrees in Guitar Performance and Music Technology from California State University San Bernardino. After interning at World Class Audio under Grammy Certificate-winning engineer Shawn Sullivan, Mario went on to pursue work as a sound engineer (working in recording studios, live performance venues, and A/V Integration) He continues to perform as a musician in the Southern California ska scene and compose music for a variety of projects.

He has worked as a composer, sound designer, and mixer for a handful of independent short films, including Terra Solution (Sound Design), Buen Provecho (Composer), Living Dead (Composer/ Sound Design), Therapy (Sound Design), and Just You and Me (Sound Design/ Additional Music, uncredited). Beyond the film and local music scene, Mario recently composed the piece Skylines, commissioned by the Vista del Lago High School Marching Band. A versatile guitarist, bassist, and keyboardist, Mario has shared the stage with top jazz artists such as The Manhattan Transfer and Peter Erskine, performed solo classical recitals, and gigged with bands all over Southern California, opening for bands such as The Untouchables, Tomorrows Bad Seeds, and The Dead Kennedys. He is currently the keyboardist for reggae/ ska/ cumbia band The G.O.P., and is the frontman and songwriter for his own ska band, The Short Necked Giraffes.

A some of his influences include Danny Elfman, James Horner, John Williams, Randy Newman, Alf Clausen, Michael Giacchino, Hans Zimmer, and Gordon Goodwin. A huge fan of sci-fi, comedy, and drama, a few of his favorite movies are Star Wars, The Abyss, and Caddyshack. He has binged The Simpsons, Stranger Things, and Rick and Morty more times than he is willing to admit.

Thrilled to be pursuing his Masters of Music in Screen Scoring from the USC Thornton School of Music in Spring of 2021, he looks forward to collaborating with up-and-coming film makers.

Mario composes and works out of his personal studio, where he spends most of his time discovering new sounds and collaborating with like-minded creatives. When not making music or watching movies, Mario can be found restoring vintage audio equipment, exploring the outdoors, scaling mountains, or traveling.