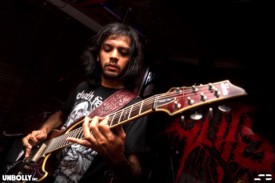 Stars For The Night - Chillwave/Electronic

Hi - thanks for stopping by! I'm Prateek and I'm extremely passionate about bringing stories to life using scores, songs and sound-design. I love many genres of films and music, and my goal as a composer is to create unique, innovative and forward-thinking sound worlds in order to serve the vision of a filmmaking team!

Favourite Games - Doom, The Last of Us, Spiderman, Crash Bandicoot.

I started off as a guitarist very early on, and began using my instrument of choice to compose and produce music. As a resident of Oman for 18 years, I eventually moved to India and began touring worldwide, organically giving myself a worldview of musical ideas that developed my versatility as a composer.

My passion for heavier music led me to compose and produce critically acclaimed death and progressive metal records, but my foray into the world of progressive rock, avant-garde and art rock eventually led me into the world of film composition. I soon realised that I had the strong ability to connect music with pictures and story-telling, and hence began composing for visual media.

I am now a composer, producer and guitarist who has gracefully received accolades, recognition and awards as an artist, and I've been featured on Red Bull Music, Rolling Stone, VICE, Prog Magazine, Rotosound, Metal Injection and a multitude of popular media for my accomplishments. Having collaborated with some of the brightest musical minds and having produced and mixed albums across various genres, my modest experience has taught me a unique understanding of the distinctive ways to communicate through music. As a film-composer in LA, I hope to meet and share a long-term, viable and gratifying relationship with every director, collaborator and story-teller.