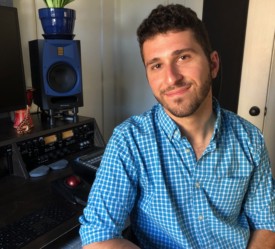 Slipping Out Of Reality (Bittersweet, Tender)

Matthew Feder is a composer for film, television, and video games. He has been called upon to add character and humanity to various documentaries and films, and on television his music can be heard on Lucasfilm’s series “LEGO Star Wars: All-Stars” and the Cartoon Network series “LEGO Ninjago: Masters of Spinjitsu,” on which he collaborated with Michael Kramer. He has also scored numerous short films such as "Flash Flood" (detailing an abusive relationship), "Chronic Error" (a sci-fi film about time-travel), and many documentaries as well. Additionally, his guitar work can be heard in EPIX’s Perpetual Grace, and on “Between Two Ferns: The Movie.”

Matthew started playing electric guitar from a young age and quickly developed into an intuitive and expressive blues, rock, and jazz guitarist. After playing in bands for many years, he turned his focus to film scoring as he curated his unique voice while concurrently pursuing his passion for storytelling and filmmaking.