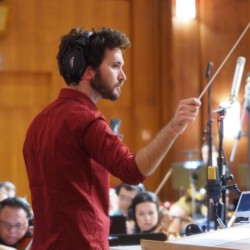 Quite a Journey (Drama - USC Project, recorded at Williams Stage)

It's Time to Fly (Orchestral, Romantic)

Was Nothing Real? (Reflective Drama)

Until We Die (Epic, Main Theme)

Was Nothing Real? (Orchestral Ending)

Hi, I'm Emiliano, a Film and Media composer from Italy. Thank you for stopping by my USC page! Here you can find my bio and listen to and watch some of my previous works. Check out also my WEBSITE for more content and don't hesitate to contact me!


BIO
Emiliano Mazzenga is an Italian composer for film, TV and new media from Rome currently based in Los Angeles.

He has composed and orchestrated music for an array of films, TV, web series and theatrical productions both in Italy and in the United States. Among them he scored the award-winning short movie ‘Locations’ and the ‘Minimad’ web series which reached more than 25 millions views on You Tube.

In 2019 he won the 'Premio Carlo Gargioni' First Prize in the Soundtrack category.

During the Hollywood Music Workshop he had the opportunity to conduct his composition ‘It’s Time to Fly’ with a 50-piece orchestra at the Synchron Stage Vienna. (watch the video below!)

He also holds a Masters’ Degree in Saxophone at the 'Ottorino Respighi' Conservatory of Latina.

Emiliano has been recently selected to the renowned Screen Scoring Masters Program at the University of Southern California for the 2019-2020 academic year where he was awarded the Harry Warren Scholarship.